Family and friends have been left totally shaken after a woman who was only days away from her wedding, filmed herself drinking poison. 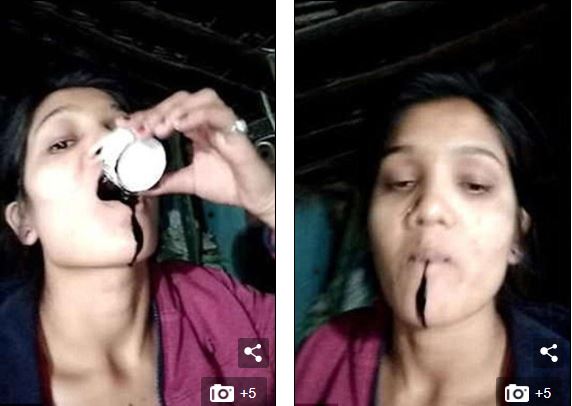 The woman filmed herself taking poison
According to Daily Mail UK report, a bride-to-be filmed herself fatally drinking poison and sent the clip to her ex-boyfriend after he allegedly blackmailed her.
The young woman, named as Nisha Devidas, is seen drinking a thick black substance in the video at her home in the village of Rohini in the western Indian state of Maharashtra.
She was ten days away from getting married to a man unnamed in reports when she died.
Her brother Ravi Kavle claims she was sick of being blackmailed by her ex-boyfriend Nikhil Borkar and decided to take her own life.
She was discovered by an unknown person and rushed to the District General Hospital in Bhandara but was declared dead on arrival.
Her grieving brother Ravi was quoted by local media as saying: ‘My sister’s wedding was due on February 4 but she embraced death just ten days before her marriage.
‘A youth named Nikhil Borkar is responsible for my sister’s death. He lured my sister on the pretext of marriage, then used her and started blackmailing her.
He said his sister took her own life because she was ‘fed up and defeated’ and he demanded that Nikhil should be ‘immediately arrested’.
Police say they are investigating. It was not clear whether they had interviewed Mr Borkar.
The nature of the alleged blackmail was not stated.