A beautiful young model has ended up suffering a really tragic misfortune after taking some cocaine with her friends on a night out.
A model somersaulted to her death after she tried to climb onto her roof during a night of wild partying, an inquest heard.
Toni Kelly, 20, had been taking cocaine and drinking alcohol with two friends when she decided to climb out of her window in just a top and underwear.
The daredevil was warned by her friends not to venture out onto the roof before she slipped and fell 12 feet onto concrete paving slabs on November 12, 2017. She died two days later after being taken off life support.
The New Zealand national, who was due to start a new job as a teaching assistant, had told her friend not to be ‘such a p***y’ before she fell in Tooting, south London.
Her mother, Christine Kelly, who had rushed from New Zealand to London to be with her daughter during her final days, remembered her as being ‘a bit of a daredevil.
The mother said: ‘She liked to climb buildings and was so adventurous.
‘When I heard Toni had fallen from a second storey building I thought she might have climbed out of a window to get a better view of the sky.
‘She was hoping to be a model and she did a video clip of herself for a TV job, everything was coming together and she had some beautiful friends.’
On the night of her fatal accident, Kelly had bought two small wraps of cocaine with Kiwi friend Patrick Robinson and Jade Hickling to watch the New Zealand All Blacks before they went on a night out, the inquest heard. 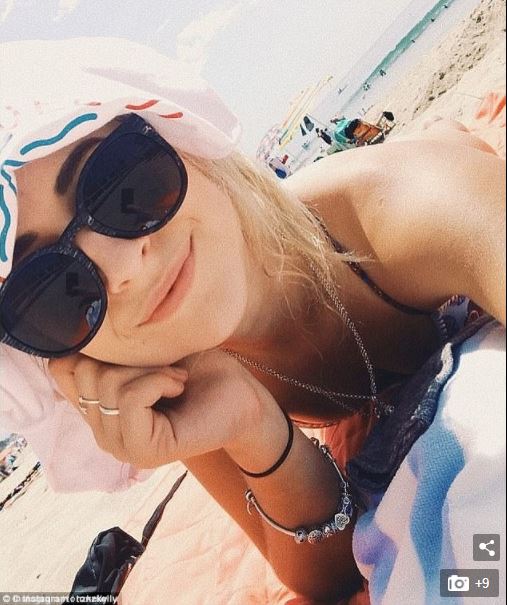 The trio returned to Kelly’s flat but despite pleas from her childhood friend Robinson not to climb from her window, Kelly brushed off his concerns and clambered from his shoulders onto the top of her bedroom window.
Moments later the pretty aspiring model, who was twice the drink-drive limit, slipped and fell suffering a catastrophic head injury, Westminster Coroner’s Court heard.
Robinson, who visited from New Zealand, said: ‘Toni said she wanted to get out onto the roof, she said it will be sweet and she told me not to be a p***y.
‘I said I would not climb up and she should not either, it looked dangerous.
‘She climbed up so she was standing on top of the window, she got up there very easily.
‘I heard a slip and saw her falling backwards. She did not make any noise. I attempted to grab her.
‘She hit the single pitched roof above the front door and somersaulted backwards onto the concrete floor below.
‘I came inside screaming and ran downstairs and rushed outside.
‘It was obvious that her head was bleeding, she was unconscious but breathing, she opened her eyes and looked from side to side.
‘She was taken to St George’s Hospital and the doctor came to see us and said Toni has an unsurvivable injury.’
At the time it was reported that she had fallen whilst taking a selfie, but this does not seem to have been the case.
Westminster Coroner’s Court was shown a video taken by Kelly in the weeks leading to her death to submit herself for a TV show where she described herself as a ‘girly girl’ and revealed she had once caught a swordfish.
Kelly, who was known as an outgoing and happy girl by family and friends, was pronounced dead two days after her fall.
Coroner Shirley Radcliffe recorded the cause of death as a traumatic brain injury as a result of an accident.
She said: ‘This was a tragic accident, Toni was a young girl of 20 and had everything to live for, she was clearly very talented, full of life and was adventurous.
‘She chose to climb out of her window and lost her grip and tragically fell sustaining an unsurvivable injury.’
Source: Daily Mail UK