A man who was going through his wife’s photos from way before they even each other has been left dumbfounded by his latest discovery. 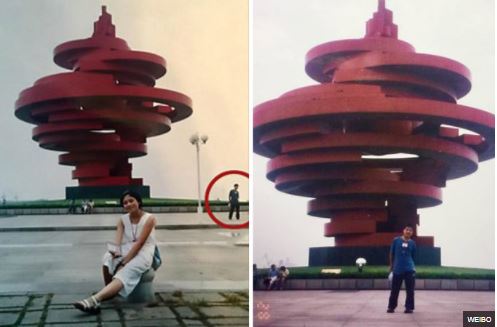 The couple were spotted in the same location years before they met
A married man was recently shocked to discover that he had appeared in the same photo with his wife long before evening meeting one another.
Read Also==> Woman Gives Birth To 14 Children By 14 Different Men, Breaks World Record
According to Daily Star UK, the husband, identified only as Mr Ye in local media reports, spotted himself in one of his partner’s family photos while going through the bunch.
Staggeringly, the pair had both taken tourist photos at the same landmark 20 years ago.
It’s hard to disregard fate when you consider Ye and Xue’s story.
See Also==> To keep your woman happy, give her oral sex 9 times a week” — Joro Olumofin
In July 2000, they both posed for snaps at May Fourth Square in China’s seaside city of Qingdao.
While Xue visited the landmark with her mum, Ye had been touring the same area with a group.
As the female visitor took a photo to remember the day, she could’ve never known that she’d accidentally got her future husband in the frame.
Two decades on, Ye began looking through his wife’s family photos.
It was then that he noticed a male figure in the background.
The photobomber was dressed all in blue and posed for the snap with a distinctive stance.
Unsurprisingly, the husband was flabbergasted when he realised that the man was him.
Ye told Sina News: “I heard her mention before that she had been to Qingdao, while I also went to Qingdao and took pictures at the May Fourth Square.
“When I saw the photo, I was taken by surprised and I got goosebumps all over my body… that was my pose for taking photos.
“I also took a photo, it was the same posture (as Xue’s photo), just from a different angle.”
After Ye uploaded the snap to Chinese social media site Weibo, it soon went viral.
Many remarked that the couple must have been destined for one another.
Reports reveal that the family now hopes to go back to May Fourth Square to take a photo together.