Life has been made more difficult for civil servants in Nigeria with state governments boldly owing salaries for multiple months. 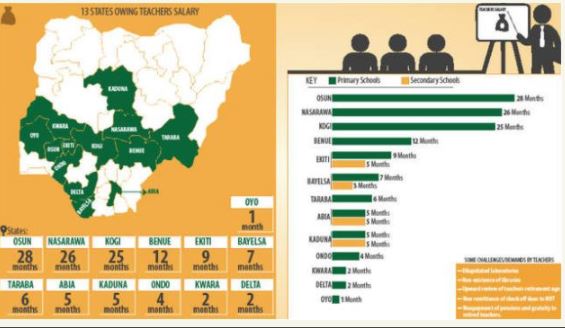 Thirteen states have not paid their teachers some for as long as 28 months, Nigeria Union Teachers (NUT) revealed this.
Osun tops the list with 28 months followed by Nasarawa, 26, Kogi 25, Benue 12 and Ekiti nine months.
NUT President, Comrade Alogba Olukoya, revealed this at the union’s 2018 annual gathering. He said the union is compiling reports from across the states before embarking on the strike. He added that both primary and secondary school teachers are affected.
“When we get report on salary, if it is not encouraging we will embark on strike. The next is the state of decays in our schools’ laboratories and libraries,” he said.
Olukoya appealed to the states to pay or begin to see the wrath of the Nigerian teachers. He, however, said Benue state will be excused from the strike because of the security challenges affecting the state at the moment.
He said the union has received assurance from the state government that the outstanding salaries will be paid soon.
The union however, berated the action of Kaduna state government for sacking teachers and directive to stop deduction of check off dues for trade unions.
The number of teachers affected in the 13 states were said to be about 300,000. The NUT could not give the amount owed teachers saying it has no record of that at the moment.
Check out the list of the states and the month they are owing teachers below:
1: Osun State; 28 Months
2: Nasaraw State; 26 Months
3: Kogi State; 25 Months
4: Benue State; 12 Months
5: Ekiti State; 9 Months
6: Bayelsa State; 7 Months
7: Taraba State; 6 Months
8: Abia State; 5 Months
9: Kaduna State; 5 Months
10: Ondo State; 4 Months
11: Kwara State; 2 Months
12: Delta State; 2 Months
13: Oyo State; 1 Month

You Might Also Like  Senator Dino Melaye Writes IG Of Police, Gives Condition To Submit Self To Police