The highly dreaded and dangerous Fulani Herdsman Attack in nigeria have reportedly gone on rampage yet again, killing five persons and torching houses. 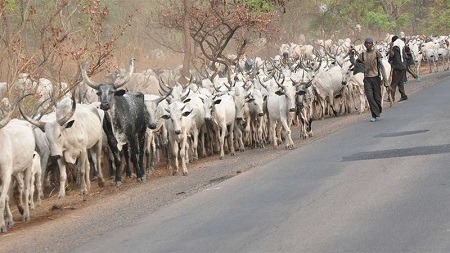 Fulani herdsmen
According to a Nigerian Tribune report, the troubled Bassa Local Government Area of Plateau State was on Thursday attacked, again, by gunmen suspected to be Fulani herdsmen who killed five people and injured eight others in an invasion that also saw about 20 houses burnt.
In the past week, no fewer than 12 people were killed in the area and several cattle rustled.
The chairman of Irigwe Development Association, Mr Sunday Abdu, who confirmed the deaths and destruction of property in the Thursday attack which occurred around 9.00 .p.m., said more than one village was attacked by the gunmen.
“The causality figure was more than five. I am just going around. Five people were killed in the first village I visited. I am still going round to see the number of people that were affected. My brother is affected, too. Until I finish going round, I cannot tell you the actual figure. As soon as I am through, I will call you,” he told Saturday Tribune’s correspondent.
A source said the attack on Jebu-Miango alone claimed five lives, adding that the gunmen attacked a passenger bus and killed five people, while people around were also shot. He said the gunmen disappeared after setting the bus ablaze.
A statement by the Public Relations Officer, ASP Terna Topev, confirmed three people dead. It said at about 8.00 p.m., the police division in Bassa Local Government Area received a distress call that Jebbu-Miango Village was under attack and the division immediately informed the command and mobilised to the place.
“While we were close to the village, the armed men suspected to be Fulani herdsmen sighted us and took to their heels. Three people were killed and burnt by the armed men.
“One Danlami Gomaster of Kwall District and one Emmanuel Audu of Jebbu-Miango were identified while the last person is yet to be identified. Eight other persons sustained varying degrees of gunshot injuries and were taken to Enos Hospital in Bassa for medical treatment. Twenty housing units were also set ablaze.”
The statement added that investigation was on to unravel the remote and immediate causes of the incident.
Meanwhile, Miyetti Allah Cattle Breeders Association (MCABAN) has written a petition to the Commander of Operation Safe Haven in charge of security in the state over what it described as incessant attacks on its members by “Irigwe Militia Group.”
The group, in the petition signed by its state chairman, Mallam Mohammad Nuru, chronicled attacks on its members in the past two months and called on the security unit to use the command intelligence network to come up with a method capable of overwhelming “the Irigwe gunmen” and any others who were on the prowl.
“These robbers should never be allowed to intimidate, harass and threaten our peace-loving community members anymore. We are using this medium to call on you to use your good office, being one of the effective security agencies in the state, to curb the menace and security challenges and enforce peace on the Plateau and its environs. We are appealing for fair and effective operation in safeguarding innocent citizens,” the association said