The French Ambassador to Nigeria has revealed what his favourite Nigerian dish is while speaking at an event. 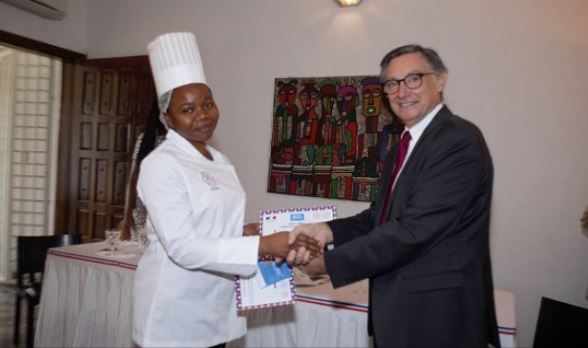 Denys Gauer (r) at the event. Photo credit: The Cable
Denys Gauer, ambassador of France to Nigeria, says jollof rice is his favourite Nigerian dish.
Gauer disclosed this to TheCable at the end of his embassy’s chef taste challenge which held in Abuja on Tuesday.
The ambassador also said he enjoys Nigerian culture.
“I love jollof rice, I see it everywhere I go… Last year I attended the yam festival in Ogidi, Kogi state. It was very interesting.”
Gauer said despite the lack of infrastructure to support local tourism growth, Nigerian delicacies could serve as the stepping stone to re-jigging the sector.
He said the nation’s rich variety of cuisines can be a money-spinner.
“I noticed there are growing numbers of good restaurants in Abuja, Lagos and other cities. But you need more professional training for this,” he said.
“We hope that events like this will attract more people and create more interest, particularly among young Nigerians to pursue a professional career in cooking. They could come to France to learn.”
He said for the culinary competition, local ingredients were mostly used by the contestants, a fact which he said showed the global possibilities of Nigerian delicacies.
“As you have noticed, some of the ingredients were imported, but a vast majority of them were produced. What the winner of the competition has done was mostly with local products. It shows you can do a great continental cuisine with Nigerian products.”
The competition featured four chefs tasked to cook a French delicacy – chicken in a pot, with officials of the French embassy as the judges.
Madu Juliet, winner of the competition, said she focused on preparing the chicken meal with local flavours.
“Most times people complain of food being too sweet, or having too much fat, so for this competition i cooked the chicken meal using salt and vegetables for over two hours to get the right taste,” she said.
“Cooking is cooking, it’s just the way you want to do it that matters.”
The chefs taste challenge was part of a wider celebration called gastronomy, a worldwide French cuisine celebration initiative, held in over 150 countries in March.