It is no news that the last few months has been very trying for vocal lawmaker, Dino Melaye. Omoniyi Saludeen and Onyedika Agbedo weigh in on all of the controversies surrounding the Senator. 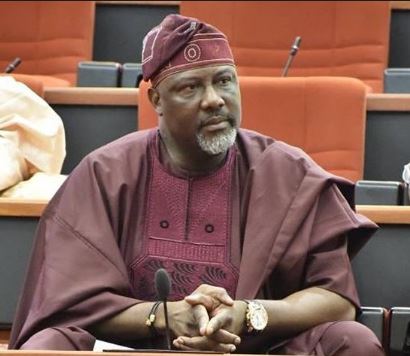 Senator Dino Melaye
This is not the best of times for Senator Dino Melaye, no matter how hard he tries to put up a stoic appearance. He has been involved in many controversies since he became a member of the 8th Senate. From his certificate saga to the launching of an anti-corruption book, revealing an alleged fraudulent practice by MTN and escaping assassination; he may, indeed, go down in history as the most controversial of all the current legislators in the Upper Chamber. But the present travails of the senator representing Kogi West Senatorial District of Kogi State arguably weigh heavier than the rest and might impact negatively on his political career.

Still receiving treatment at the Zanklin Hospital, Mabushi, Abuja, after he purportedly jumped off a moving police van at Area One Roundabout, Garki, in an attempt to prevent the police from taking him to Lokoja, the Independent National Electoral Commission (INEC) has been busy, perfecting the schedule of activities for his recall, which ends today. And the outcome could go either way. Meanwhile, the police are not showing any intention to let him off their hook.

Although his colleagues in the Senate have shown enormous solidarity to him, including shutting down plenary to visit him at the hospital, there is no indication that the police would budge. Just last Friday, the Inspector General of Police (IGP), Ibrahim Idris, had cautioned the Senate not to “personalise or trivialise” the criminal offenses indicting Senator Melaye, but to allow the rule of law and justice take their course. The journey that took Melaye into his present circumstance started on March 19, this year, when the police said they have filed a case in a Lokoja court accusing him and three other persons of illegal possession of firearms. The police spokesman, Jimoh Moshood, who made the announcement, said the police took the action following the confession of two ‘dreaded’ thugs who claimed they were working for Senator Melaye.

“The men were arrested on January 19 at Ogojueje in Dekina Local Government Area of Kogi State after a shootout with the police and have confessed being hired by Melaye to cause mayhem in Kogi State,” Moshood said. The police said they seized from the thugs and their gang members two AK47 rifles, five pump action guns, two locally made pistols and heaps of charms.

“The suspect further confessed that Melaye told him that they should start working for the senator as his political thugs and they should recruit and train more thugs to work for him in preparation for the 2019 general election to enable him challenge his political opponents and disorganise Kogi State,” Moshood said.  The police said one of the principal suspects further confessed that Melaye handed over a bag containing one AK47 rifle, two pump action guns and N430,000 to share with his boys.

According to the police spokesman, the force wrote a letter dated March 2, 2018 addressed to the Senate President, Bukola Saraki, informing and requesting him to release Melaye to report to the Commissioner of Police, Kogi State Command on March 7, 2018 to answer to criminal offences levelled against him to enable the police carry out a discreet investigation into the confessions of the principal suspect. Melaye, however, refused to honour the police invitation until his arrest last Tuesday after a 24-hour siege to his home in Abuja. Senator Anthony Adeniyi, who represented Ekiti South in the 7th Senate, while reacting to the matter in an interview with Sunday Sun, said: “Nobody is above the law. Whoever commits a crime will be answerable to it. The only persons that have immunity are the executive people – the president, vice president, governors and deputy governors. “If he (Melaye) feels that the allegation is a frame up, let him go to court to prove his innocence rather than staying away. He has to attend to it that he is actually framed up. If an allegation is made against anybody, it is the duty of that person to make sure that he proves his innocence. The law says they must prove him guilty, but he has to surrender himself for the law to take its course. So, he can’t be running away. It is improper.

The fact that he is a Senator does not mean he cannot be tried. That is the position of the law.”

The presidential candidate of the United People Party (UPP), Chief Ckekwas Okorie, also speaking in the same manner, said the action of Senator Maleye portrayed him as a desperate tout who was out of his mind. His words: “Honestly, I am not impressed by the drama he put against his arrest.

I do not see the need for his attempt to escape by jumping down from a moving vehicle. What he wanted to prove, I am yet to come to term to it. I am totally unimpressed by the drama he tried to put up which is even risky to his health and life. What he intended to prove by that drama is not clear to me. He behaved like a desperate tout that is almost out of his mind. With all the comforts that we hear he has around him, he still wants to put his life in that type of danger. The attempt to run away from a moving vehicle showed that those who stopped him from travelling may be right. The impression he gives is that if he has the opportunity, he will disappear into the thin air.  Let him face the trial.”

You Might Also Like  Senator Dino Melaye Raises Alarm Over His Life, Begs United Nations And UK To Come To His Aid

Okorie, however, condemned the seeming intolerance of government to criticism, saying it is unhealthy for democracy.  “But having said that, what is becoming common is that once you have a strident voice as an opposition against this government, something will come up against you for which you will be hounded, persecuted and oppressed. Sometimes, they put you in a situation that you begin to lose your sanity. When some of us make strong statements, even as factual as our statements are, most of the calls we get are concerns for our lives.

“Democracy cannot thrive without virile opposition. If somebody has gone out of his way to malign a government, the court is there.

Using paraphernalia of government to hound citizens, especially people in the opposition is not right. This is part of the reason the senators have decided to show solidarity. It is not healthy for our democracy; it is not healthy for this government. The funny part of it is that the majority of these people belong to the same political party.
But we are not surprised because some of us had already said it that the merger of APC was a gathering of strange bedfellows and that it would only be a matter of time before it will implode,” Okorie said.
-Written by Omoniyi Saludeen; Onyedika Agbedo